A new study has revealed that 95% of promising discoveries from cancer research labs fail when drug companies test them in real patients. Given that only half of new cancer drugs are affordable enough for routine use by the NHS, this means that only 2.5% of cancer research discoveries are likely to end up benefiting patients.

As if this wasn’t sad enough, those drugs that do make it through the approval process are usually only expected to add a few extra months to patients’ lives compared with existing treatments – just 2.7 months extra on average for new solid cancer drugs approved between 2002 and 2014.

Is this really the best we can achieve from cancer research….or could we do better?

The high failure rate of promising new cancer treatments was one of the findings from the largest ever study of clinical development success rates published in May 2016, which examined 7,455 trial drugs for a range of diseases over the last decade. The study found that only 5.1% of trial drugs for cancer made it through the testing and approval process, around half of the amount for other diseases, begging the question as to why so much promising cancer research fails to live up to expectations.

Aside from the ethical questions raised from testing drugs in patients that fail 95% of the time, the high failure rate of cancer research also has a knock on effect on affordability and access to cancer drugs in general. Drug companies recover the cost of research failures by setting higher prices for drugs that do make it to market, so the high failure rate is one of the reasons why prices for cancer drugs are so high and why many are unaffordable for the NHS.

Obviously there has to be a degree of trial and error with all research but alarms bells should be ringing if we are spending 95% of the time pursuing dead-ends.

Cancer Research – What We put In and What We Get Out

Each year the British public contributes an estimated £2.5bn towards the cost of researching and developing new treatments for cancer.   Around £1.5bn of this is the cost to the NHS of mark-ups on cancer drug prices to cover research and development (R&D) costs.  And a further £0.18bn is funded directly by the Government and Government funded Research Councils.  These costs are ultimately borne by the public through taxes.

On top of this, the public makes a significant contribution to the discovery of potential new drugs through donations to cancer research charities. In the UK alone, donations to cancer research charities exceed £800m annually, with the lion’s share of this being received by Cancer Research UK. Last year, 67.4% of the donations to Cancer Research UK were spent on research, so given current failure and affordability rates, this means that less than 2% of donations are likely to result in effective new drugs that the NHS can afford to offer to patients – most of it is spent pursuing dead-ends and treatments we can’t afford.

So, how come we have so little to show for the money we put in? Is it simply that the opportunities are hard to find and that it is difficult to predict in a lab which ones will work in real people? Or is there more to it than that? Could it be that we aren’t selecting the best opportunities to investigate?

Selecting Opportunities Based on Profit Potential

While a lot of cancer research is funded with public money, we rely on private drug companies to translate this research into new drugs. According to Sir Robert Thompson, former President of the Royal College of Physicians, “Drug companies are developing medicines they can profit from, rather than those which are likely to be the most beneficial”. This shouldn’t really be a surprise and we can’t really blame them for this, as private companies have a duty to invest money where it creates maximum value for their shareholders. However, this is not necessarily where it creates maximum value for patients or where there is the greatest need.

Perversely, under the current R&D system, it is more profitable for drug companies to invest in drugs with limited benefits for patients, as more money can be made by making baby-steps forward than giant leaps. This is just insane – millions of people are suffering and dying from cancer every year and we have an incentive system for developing cures that concentrates investment on the best opportunities for shareholders rather than patients.

Selecting Opportunities Based on Patent Potential 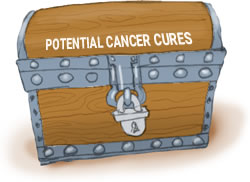 But perhaps a bigger opportunity to improve the success of cancer research lies in the treasure trove of untapped potential from promising treatments that can’t be patented.

The current R&D system relies on patents as a way to encourage investment in R&D. Drug patents are normally awarded for 20 years and during this period, only one company can sell the drug, enabling it to charge higher prices and therefore to make a profit on its investment.

So, if a substance or compound can’t be patented, it simply won’t attract the private investment needed to develop and test it, as there would be no way to profit from the investment. This is fine if all promising opportunities can be patented but that is certainly not the case.

There are two groups of opportunities that have both demonstrated potential for treating cancer but which can’t be protected by patents:

A large number of small scale studies have identified anti-cancer properties in both of these areas and there have also been many anecdotal reports of patients who have had success with their own formulations and combinations. There are over 100 published medical studies into the anti-cancer properties of cannabis alone and several innovative initiatives carrying out small-scale patient studies into the anti-cancer benefits of off-label drugs such as Metformin and Mebendazole.  Just recently, further evidence has been found to show that statins can dramatically improve cancer survival rates.

But none of these opportunities have attracted the scale of investment needed to thoroughly research and development them, as they can’t be protected by patents so they are not financially attractive to private investors.  This huge untapped potential is not being explored due to what effectively is a loop-hole in the R&D system.  This is ludicrous given the scale of suffering and loss of life caused by cancer and the desperate need for faster progress.  Where promising opportunities fail to attract private investment, governments should either step in with public money, or should develop alternative ways to attract private investment that don’t rely on patents.

research breakthroughs don’t amount to a row of beans if they don’t translate into safe, effective and affordable new treatments that patients can access

When a process fails 95% of the time, we have to question whether it could be carried out more effectively – we can’t just bury our heads in the sand and keep pouring money into a bucket with a big hole in it. A lot of very clever people are working hard to identify new solutions for cancer, but research breakthroughs don’t amount to a row of beans if they don’t translate into safe, effective and affordable new treatments that patients can access.

There really needs to be a public inquiry to determine whether the public is getting value for money from its £2.5bn contribution towards the cost of developing new cancer drugs. The public deserves to know that its money is being used as wisely as possible and that there is accountability for the results.  On the face of it, under the current patent-based R&D system, this doesn’t seem to be the case – our goal may be to “Beat Cancer Sooner” but the current system is pretty much certain to “Beat Cancer Later”. We urgently need a complete review of the whole cancer R&D process, for the sake of everyone dying for a cure.

The Dying for a Cure campaign is calling on the UK Government to fix the broken system for developing new cancer drugs, so that progress is not constrained by profit motives. Please help by signing our petition.

No Replies to "95% of Promising Cancer Research Fails"